There was not much typical about the service of Japanese Americans in the Military Intelligence Service during World War II.

They served in ones and twos, in 10-man teams or detachments, all over the Pacific and China-Burma-India theaters of war, as well as stateside, even Europe and Latin America. Many an Allied commander thwarted an enemy attack with tactical intelligence gained by MIS interpreters and POW interrogators.

MIS linguists were involved in strategic coups such as the radio intercept that led to the shoot-down of Japanese Adm. Isoroku Yamamoto, Kazuo Yamane’s discovery of the entire Japanese Army ordnance inventory and the team translation of Japan’s Z-Plan for defense of the Marianas and the Philippines.

Because of heavy secrecy, most Americans were unaware that Americans of Japanese ancestry were fighting in the Pacific. Others were likely to mistake them for the enemy. An MIS Nisei from Hawaii recalled an occasion on Okinawa when he became separated from his patrol and wound up in a shell crater between U.S. and enemy positions: “Every time I stuck my head up, both sides would shoot at me. I had a Japanese face and an American uniform.”

At least 19 MIS Nisei died in the war, 10 of them in a plane crash on Okinawa just two days before Japan surrendered.

Large numbers served with the Allied Translators and Interpreters Section (ATIS) of Gen. Douglas MacArthur’s Southwest Pacific Area headquarters in Australia. From there, many of the Nisei linguists deployed to the Solomon Islands, New Guinea, the Netherlands East Indies and the Philippines, serving crucial roles in campaigns that today are forgotten.

The first MIS Nisei killed in action, Terry Mizutari of Hilo, was struck down by an enemy bullet at Maffin Bay, New Guinea, defending the 6th Infantry Division command post against enemy attackers. Mizutari was awarded a posthumous Silver Star.

The Navy and Marine Corps did not enlist Japanese Americans during the war, but clamored for them after they proved their value in Guadalcanal. Hundreds were sent to the Joint Intelligence Center Pacific Ocean Areas (JICPOA) Annex in Honolulu where they studied captured documents, interrogated POWs and prepared for Adm. Chester Nimitz’s Central Pacific island-hopping campaign.

One was Hoichi “Bob” Kubo, who earned the Distinguished Service Cross with the 27th Infantry Division on Saipan, for persuading eight holed-up Japanese soldiers to surrender, saving the lives of more than a hundred civilians they were holding.

MIS linguists served in the grueling jungle campaigns in Burma with Merrill’s Marauders, the MARS Task Force and Office of Strategic Services (OSS) Detachment 101 and the British Chindits. Others worked out of the Southeast Asia Translation and Interrogation Center in New Delhi. Still other MIS linguists served in China, some with Nationalist forces, a few with Mao Tse-Tung’s Communist army.

Many others, such as the Nisei in the 6th Army Air Force Radio Squadron Mobile of the 10th Air Force in Burma, spent countless hours listening to enemy radio communications or poring over documents for vital information at JICPOA, ATIS and the Pacific Military Intelligence Research Section in Virginia. 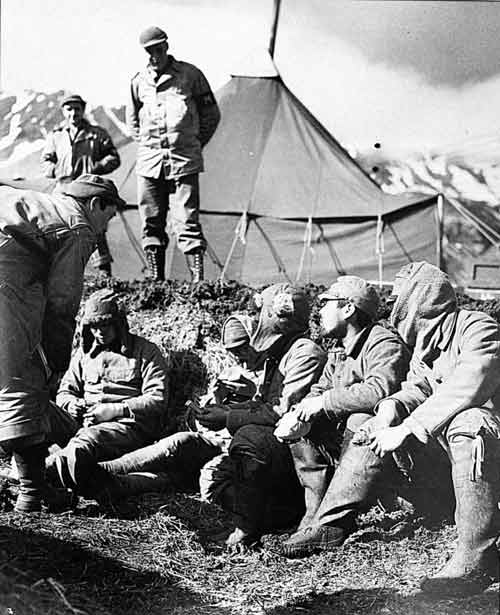 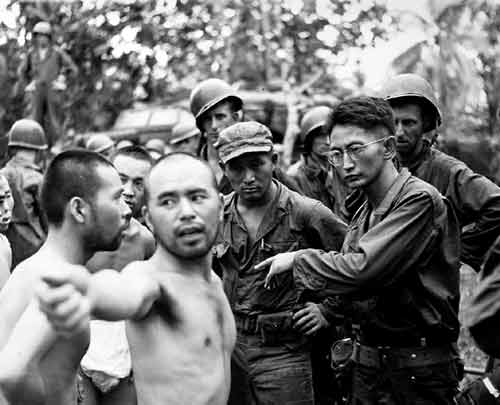 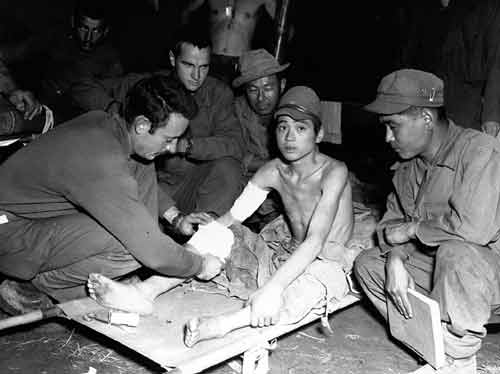 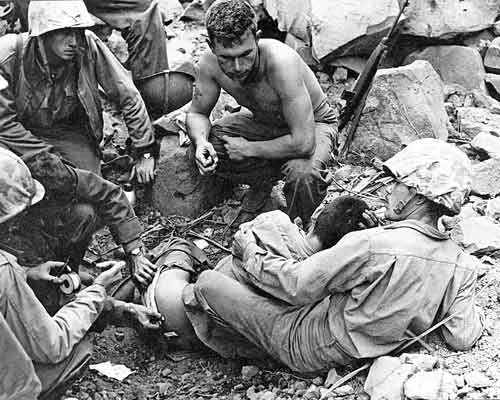 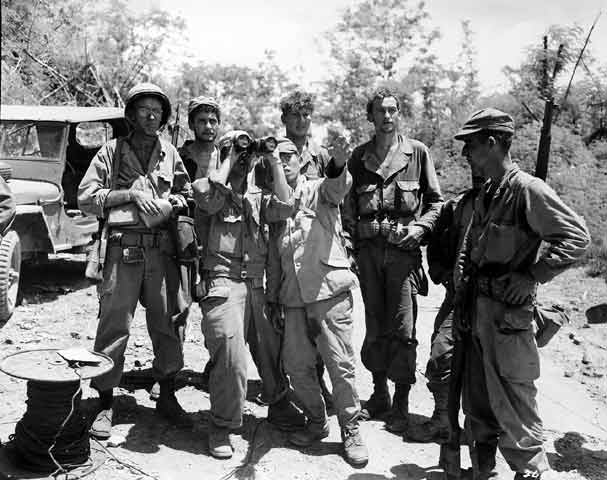 Bulacan, Luzon, Philippines, May 20, 1945: An MIS interpreter with the 172 Infantry, 43rd Division uses binoculars to check the spot being pointed out by a Japanese prisoner captured in the vicinity of Ipo Dam. (U.S. Army Signal Corps photo)