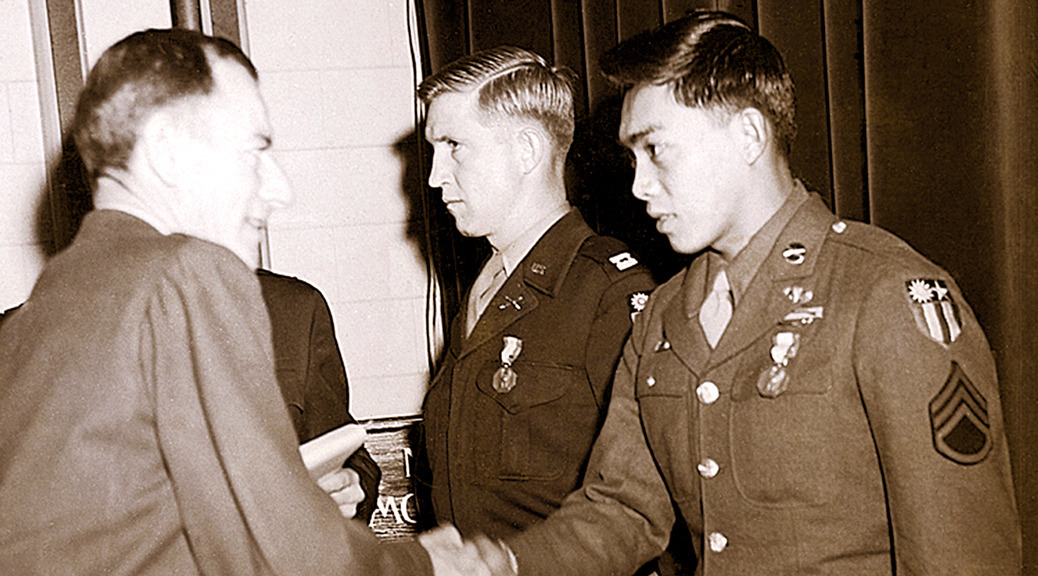 The late Dick S. Hamada has been inducted into the Army’s Military Intelligence Corps Hall of Fame at Fort Huachuca, Arizona.

Hamada, originally from Kukuihaele on Hawaii Island, was one of about 6,000 Japanese Americans – Nisei – who served in the Military Intelligence Service in World War II against their ancestral homeland. Hamada was living on Oahu in March 1943 when he answered the initial call for volunteers for the 442nd Regimental Combat Team. During basic training in Mississippi, Hamada was recruited by the Office of Strategic Services, forerunner of the Central Intelligence Agency. After intensive training, he was one of a handful of Nisei assigned to OSS Detachment 101. They spent months deep behind enemy lines in Northern Burma conducting clandestine operations, leading native and Allied troops in guerilla raids, gathering intelligence and rescuing downed Allied aviators. Deep in Burma’s jungles, their only supply line consisted of air drops. Hamada was hospitalized twice with malaria and dysentery, encountered tigers, learned how to deal with leeches.

In early 1945, Hamada singlehandedly saved his battalion from being wiped out at the village of Ke Hsi Mansam. Made up primarily of native Kachin troops, the battalion was in the third day of fighting, and Hamada was leading a platoon of Nationalist Chinese troops protecting its left flank. Under intense, concentrated Japanese attack, Hamada’s troops began faltering. He went from foxhole to foxhole, exposed to direct enemy fire, exhorting and rallying his men and manning a machine gun himself. The platoon held and the enemy attack was repulsed. Hamada’s commanding officer, an American, commended his leadership and credited Hamada with saving the entire battalion from “total defeat.”

Following the Burma campaign, Hamada and other Japanese Americans were assigned to OSS Detachment 202 in China. Emperor Hirohito’s August 15, 1945, announcement of Japan’s capitulation immediately raised concerns about the fate of thousands of U.S. and Allied prisoners – military and civilians – still held by the Japanese. Seven OSS teams, each including a Nisei interpreter, were dispatched to parachute into Japanese prison camps in China, Korea and French Indochina. Hamada was assigned to Operation Magpie, parachuting into Fengtai Prison in Peiping (today’s Beijing) on August 17. After a hostile reception and two days of negotiation, the Magpie team secured the liberation of several hundred prisoners, including four of the Doolittle Tokyo Raiders and the commander and other survivors of the Wake Island garrison.

Following the war, Hamada returned to Hawaii and worked at the Pearl Harbor Naval Shipyard, retiring as a planner and estimator supervisor. He was also widely known around the Islands as a baseball and softball umpire.

He was nominated for the Military Intelligence Corps Hall of Fame by retired Maj. Gen. Arthur Ishimoto, an MIS veteran of World War II who went on to become adjutant general of Hawaii.

“Dick Hamada was a true American hero whose exploits were largely unnoticed during his lifetime. His induction into the Military Intelligence Corps Hall of Fame is long overdue and well-deserved,” said Ishimoto, who served in combat in the Philippines and in the occupation of Japan after the war.

“The Nisei were recruited to use our knowledge of Japanese language and culture against the enemy,” said Ishimoto. “But we were soldiers first, as Dick Hamada and many others demonstrated.”

Ishimoto also initiated a review of Hamada’s role in the battle at Ke Hsi Mansam for a possible upgrade of the Bronze Star that Hamada was awarded.

The two men only met a year before Hamada’s demise, when they spoke on a panel discussion about the MIS. It is no wonder that many MIS Nisei didn’t know each other. Many of them were deployed in 10-man teams attached to fighting units. Many others drew special, temporary assignments in small groups or as individuals. And military intelligence, both during and after the war, was cloaked in secrecy until some records were declassified many years later.