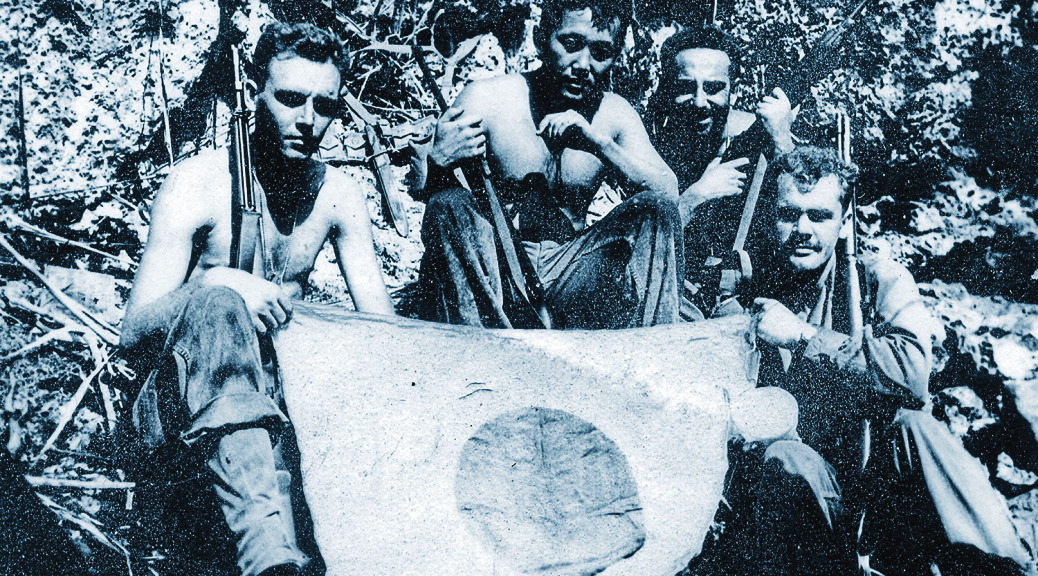 Above: SOUTH PACIFIC, ca. 1944: Hoichi “Bob” Kubo, second from left, takes a break with some GIs and their war trophy, a ceremonial flag taken from an enemy soldier or corpse. (Photo courtesy of Kubo family and Eric Saul)

The MIS Nisei were valued as spies, interrogators and translators. But fate or circumstance could turn them instantly into combat infantrymen.

Hoichi “Bob” Kubo of Puukolii, Maui, earned the Distinguished Service Cross with the 27th Infantry Division on Saipan in July 1944. Kubo learned from two prisoners that the Japanese planned a gyokusai – an all-out attack. His warning enabled the 27th Division to crush the attack. It wasn’t easy: At one point, Kubo helped defend a command post with his rifle.

A few days later, Kubo scaled a cliff alone and entered a cave where some Japanese soldiers were holed up with many civilians whom they threatened to kill. Kubo shared his rations with the enemy soldiers and challenged them to release the civilians. He told them his grandfathers had fought in Japan’s elite 5th and 6th divisions against Russia. Kubo said his parents were Japanese, like theirs, but his country was America. He quoted a Japanese proverb to explain that he owed his higher loyalty to his country: “If I am filial I cannot serve the Emperor. If I serve the Emperor, I cannot be filial.” He also pointed out that America had honored him with the rank of sergeant, outranking the Japanese in the cave.

In the end, nine Japanese soldiers and 122 civilians walked out of the cave to safety.

The first MIS Nisei killed in action, Yukitaka “Terry” Mizutari of Hilo, was struck down by an enemy bullet at Maffin Bay, New Guinea, while defending the 6th Infantry Division command post against a night attack in  June 1944. The pre-war draftee from the 100th Battalion was awarded a posthumous Silver Star.

Frank Hachiya, a 25-year-old from Oregon, earned a posthumous Silver Star while serving with the 7th Infantry Division on Leyte in the Philippines. Hachiya was a Kibei, one of the many MIS Nisei born in America and educated in Japan.

On January 3, 1945, he volunteered to infiltrate across an enemy-held valley to scout a Japanese position. Hachiya was shot and mortally wounded – accounts differ on who shot him – but he struggled back and reported the vital information he had collected before he succumbed.

A few weeks earlier, the American Legion post in his hometown in the Hood River Valley of Oregon voted to strike the names of 16 Japanese Americans from its honor roll of native sons serving in the war. Hachiya’s family had been forced out of Hood River during the mass relocation and some residents didn’t want any evacuees to return.

After Hachiya’s heroic death, news of the post’s racist action drew national attention and scorn, and the names were eventually restored.

Dick Hamada was one of 10 Hawaii Nisei who served behind enemy lines in Burma with Office of Strategic Services Detachment 101.

In April 1945, Hamada was a platoon leader in a battalion of native guerillas and Chinese troops that lost hundreds of men in two nights of attacks by a large Japanese force near Ke Hsi Mansam. On the third night, the enemy attack threatened to break Hamada’s platoon, which “would have undoubtedly resulted in the complete defeat of the whole battalion,” one U.S. officer said. Seeing this, Hamada left his foxhole and went from man to man, encouraging them to fight on. The platoon held and repulsed the attack.

Hundreds of MIS Nisei served with less fanfare in the China-Burma-India Theater of war. Some were in combat for months in Burma, in brutal jungle warfare that foreshadowed the Vietnam War.

In China, James Kobayashi posed as a peasant working in the rice paddies while he spied on Japanese troop movements and reported the information using a hidden radio.

Other MIS soldiers performed heroic deeds and served similar crucial roles in campaigns and battles that today are forgotten.

Next: At Japan’s Doorstep