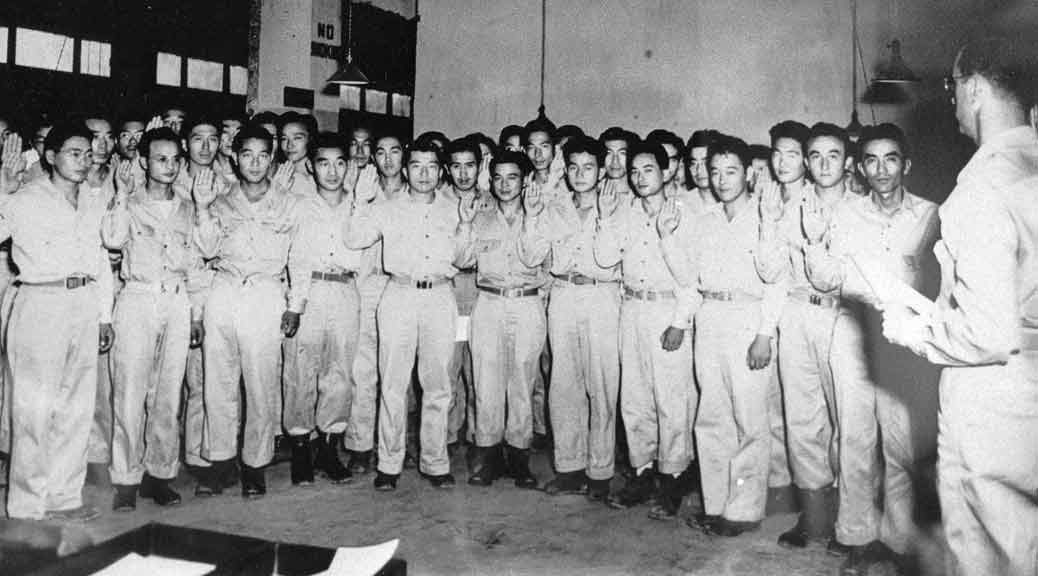 Above: MANILA, August 18, 1945: Nisei of the Allied Translators and Interpreters Section are commissioned as second lieutenants. Few Nisei were commissioned during the war, unlike Caucasian graduates of the Navy and Army Japanese language courses. (The Marine Corps also had a program for enlisted linguists.) Many Nisei chafed at being denied commissions while haole officers, often with poorer language skills, advanced in rank quickly. Those policies, along with racial segregation, were eliminated after the war. (National Archives photo)

The 6,000 Japanese Americans who served in military intelligence against Japan in World War II “saved over 1 million American lives and shortened the war by two years.” That statement, attributed to Major General Charles Willoughby, General Douglas MacArthur’s intelligence chief, might be debatable. Even some MIS Nisei dismissed it as an exaggeration. There were other assessments:

“The United States of America owes a debt to these men and to their families which it can never fully repay. … They were worthy, as individuals and as a group, of the highest praise for their invaluable contributions to the success of Allied arms.”
Colonel Sidney Mashbir
commandant, Allied Translators and Interpreters Section

“We would have been twice as blind as we were on these islands without the Nisei. Without a doubt, our Nisei have saved many, many American lives.”
Lieutenant Colonel William Van Antwerp
27th Infantry Division G-2

Each one was as valuable as an infantry company, despite the fact they were not combat troops. Many Allied soldiers returned safely to their homes because the Nisei lighted the darkness in front of them by interrogating prisoners and translating documents.”
Colonel Gaspare Blunda
commanding officer, Southeast Asia Translation and Interrogation Center

“Well, the country needed us, and unlike people of today, we didn’t bargain with our government. We just went ahead and did our job, to be a good American citizen.”
MIS veteran Gene Uratsu

“Before World War II, I entertained some doubt as to the loyalty of American citizens of Japanese ancestry in the event of war with Japan. From my observations during World War II, I no longer have that doubt.”
Admiral Chester Nimitz
commander in chief, Pacific

“The American-born Japanese language specialists – translators, interrogators, radio monitors and trained order-of-battle experts – were one of the chief means of obtaining intelligence of the enemy and his plans. … Nisei language specialists were with every major unit in every engagement from Guadalcanal and Attu to the march into Tokyo.”
Brigadier General John Weckerling
deputy assistant chief of staff, War Department G-2

“As for the value of the Nisei group, I couldn’t have gotten along without them. Probably few realized that these boys did everything that an infantryman normally does plus the extra work of translating, interrogating, etc. Also they were in a most unenviable position as to identity, as almost everyone from the Japanese to the Chinese shot first and identified later.”
Brigadier General Frank Merrill
commander, 5307th Composite Group, Provisional

“The Nisei linguists were, in short, working in every possible effort and in every possible place to win the war for the United States. They had swallowed their pride, accepted the harsh rebuffs and the incarceration of their families and pitted their unique skills and knowledge against America’s enemy. But the secrecy they had to maintain denied them public acknowledgement of their deeds.”
Author Lyn Crost
Honor by Fire

“If you Japanese Americans are ever questioned as to your loyalty, don’t even bother to reply. The magnificent work of the graduates of the Military Intelligence Service Language School in the field has been seen by your fellow Americans of many racial extractions. Their testimony to your gallant deeds under fire will speak so loudly that you need not answer.”
Major General Clayton Bissell
assistant chief of staff, War Department G-2

Next: Reunion on Okinawa