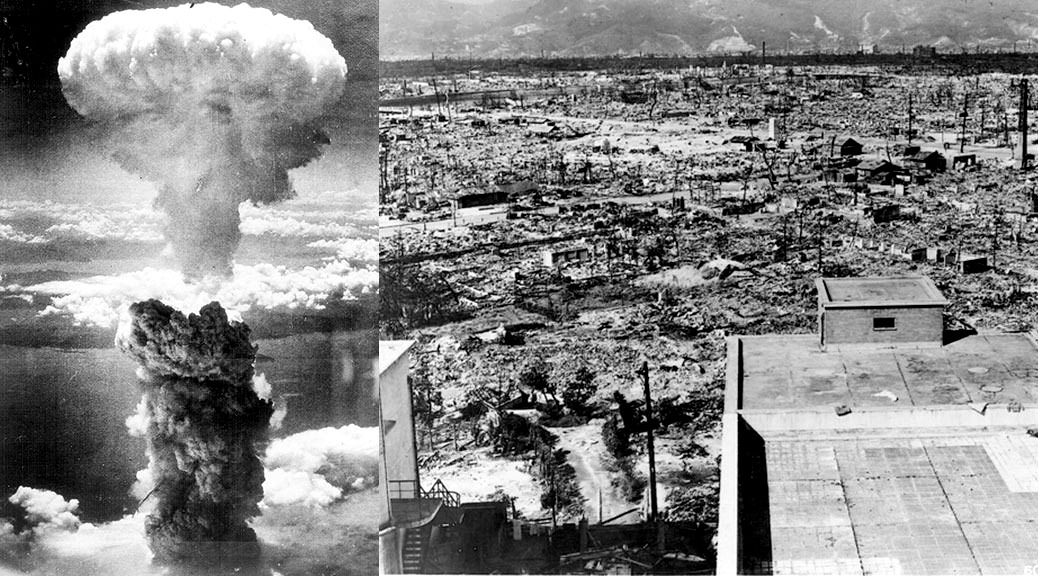 Above: On August 6, 1945, the United States dropped an atomic bomb on the Japanese city of Hiroshima, then three days later, on the city of Nagasaki. At left is the atomic mushroom cloud over Nagasaki, and, right, the bombing aftermath of Hiroshima. Word of the frightful new weapon raced around the world. Some people, including Japanese Americans with relatives in the blasted cities, questioned whether the bombings were necessary. Many MIS Nisei and other GIs, however, believe that the bombs saved thousands of U.S. lives and millions of Japanese by convincing Japan’s leaders to end the war rather than drag it out.

Emperor Hirohito’s recorded message announcing the surrender was broadcast over radio throughout Japan on August 15, 1945. It was the first time most of his subjects had ever heard his voice. U.S. officials immediately began reaching out via radio, leaflets and other means to make arrangements for the formal surrender and to inform the Japanese public and military.

While the world celebrated the end of the war, MIS Nisei were needed more than ever as Allied commanders throughout Asia and the Pacific contacted their Japanese counterparts.

On August 19, Hoichi “Bob” Kubo, who fought his way across the Pacific, saw the Japanese surrender party arriving at Ie Shima near Okinawa in planes specially marked with green crosses. The Japanese delegation transferred to a U.S. plane and flew to Manila to make arrangements for a formal signing of the instruments of surrender on September 2.

Meanwhile, MIS Nisei began arriving in Japan with advance teams. Charles “Slim” Matsumoto of Puhi, Kauai, arrived at Atsugi air base where some diehards had just given up trying to prolong the war.

Six Nisei who had served with the Office of Strategic Services in Burma were deployed with small teams to parachute into Japanese prisoner of war camps to protect thousands of Allied POWs from retribution.

On August 17, Dick Hamada jumped into the camp at Peiping, with six other Americans, bearing food, medicine and other supplies for the POWs there. Upon landing they were surrounded by armed Japanese troops. After convincing the commander that Japan had surrendered, the GIs liberated more than 600 Allied prisoners, including four survivors of the April 1942 Doolittle Tokyo Raid. Also on August 17, another team freed Weihsien prison camp. On August 27, Ralph Yempuku of Honolulu dropped onto Hainan Island, again to a potentially deadly reception.

On September 2, three MIS Nisei – Tom Sakamoto and Noboru Yoshimura of California and Jiro Yukimura of Kauai – were aboard USS Missouri for the formal signing of the surrender documents. That ceremony triggered similar ceremonies across Asia and the Pacific as Japanese troops laid down their arms and surrendered to American and Allied commanders. Many of the isolated Japanese garrisons had to be convinced to surrender. MIS Nisei did much of the convincing.

Ralph Yempuku was at the September 16 surrender of Japanese in Hong Kong to the British. One of his kid brothers, Donald, who had returned to Japan with the family before the war, was translating for the Japanese that day. He recognized Ralph but dared not say a word, for fear of disrupting the ceremony.

Next: Forging Peace from War